In both France and Italy I have come across dozens of memorials to those killed during the world wars. What were distant wars for Americans were wars fought in local villages by local people in Europe. And while time heals all wounds, it is slow to do so. My host in Albairate, Lorenza, told me a story that brings the horror of an old war very close.
Her grandfather had been a soldier in the Italian army during World War 2. When the king of Italy surrendered, he had quit the army and returned home, but the war was far from being over for him. He had to go into hiding to avoid the fascists, but was turned in to them by someone in his village. The fascists were going to shoot him, but his pregnant wife and daughter pleaded for his life, so he was imprisoned instead. 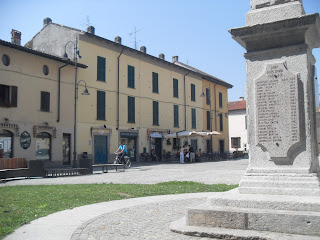 When the war finally came to an end, the fascists, to save themselves, put all of their prisoners into a building and set fire to it. As the prisoners tried to escape through the windows, they were shot. Lorenza's grandfather somehow managed to survive, but he was a ruined man; after the war he was put into an asylum because he was considered dangerous; if he believed anyone to be a fascist, he tried to kill them. 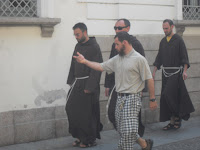 Posted by Kenneth Schroeder at 2:17 PM