The Work/Study MIR Peace Camp at Betania: Part I

Franco Perna, an Italian Quaker and long-time peace activist, prefers action to words. This is evident at Betania, a religious retreat near Padengha sul Garda, when he can be seen chopping firewood or digging in the garden every morning for one week every summer. This preference for action over words can also be seen when one takes a look at the life he's lived.
Franco's peacemaking experience seems incongruous with his appearance; he looks no older than a healthy 60 year old, yet he was doing work for Service Civil International in 1961 by helping to build a school in rural Poland. By the late 60's he was European Secretary for SCI, and as a convinced Quaker, Franco has worked for peace in Palestine, South Africa, Eastern Europe and locally, serving for a time as Secretary for the European and Middle East section of the Friends World Committee for Consultation. But it is manual labor in the service of community peacebuilding that the 75 year old enjoys the most. It is the type of work he spent his youth doing, as he grew up in a poor family. When a group of us discussed the virtues of simple living, Franco's response was that simplicity was never a choice for him, but the only option, and he's never known any other way.
I came into contact with Franco through a Quaker in the French village of Congenies, where I stayed for a few days in June to visit at the Quaker Meeting House. Libby, my host, contacted Franco, as my route would take me past Lago di Garda, where Franco lives.  Franco then invited me to visit him at Betania for the week-long peace camp where members of Movimento Internazionale della Riconciliazione (the Italian chapter of the International Fellowship of Reconciliation) were gathering to work, study, and live in peace and harmony. The camp became my focus in the weeks leading up to it, and once I had arrived, Franco acted as my host by paying my way through it, by translating for me, and by explaining to me about the world of organized peacemaking.
Meanwhile, I thoroughly enjoyed my first days at Betania, as I worked alongside everyone else, cutting firewood, digging in the garden or doing work in the kitchen. Mealtimes were a joyful occasion, and afternoon classes in peacemaking, or in living simply, were enlightening. The evenings were spent watching films, listening to talks about the problem of the TAV in Susa Valley, or listening to peace music. The overall atmosphere was always one of joy, and I quickly realized that the people at Betania, and the members of MIR, are examples to the world in how to live in peace and harmony.
Next blog, more on  Betania and the MIR... 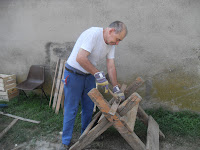 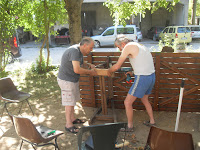 Posted by Kenneth Schroeder at 3:25 PM