After my sidetrip to Sommieres, I went with my Congenies Quaker friend, Alastair, to visit one of the communities of L'Arche de Lanza del Vasto. I had first thought about visiting while I was in Morocco; a friend had sent me some information about the communities begun by Lanza del Vasto when Gandhi had told him to spread peace in Europe.
I thought about visiting again when I was in Montpellier; my host there, Patrice, suggested I do so.
I didn't finally decide to make the visit, though, until I was with the Quakers in Congenies. Alastair told me he had spent seven months at the community in La Fleyssiere, that he was going to visit in a few days, and he asked if I'd like to come along. When he offered to pay the bus fare, how could I refuse? 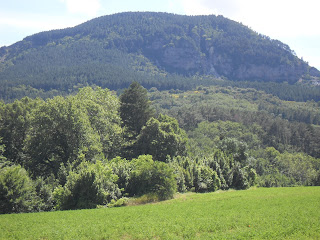 Alastair met me in Sommieres, where, after various buses and trams, we arrived in Lodeve. As the school bus we were hoping for to get us to La Fleyssiere did not arrive, Alastair called the community, and a car made the long journey down to pick him up. Unfortunately, there was no room for two passengers, so I started walking, then hitchhiking (which I can do when I'm off route). It wasn't long before a lady from the Buddhist monastery near La Fleyssiere gave me a ride.
When I walked onto the community's grounds, everything was quiet, and I walked up the steps of an old building to have a look around. Inside there was a man sitting, quietly preparing sweet peas for jarring. He had the appearance of a Hindu ascetic, though I was to learn later that he is a Muslim, and a Sufi.
"You're Ken," he said softly.
"Yes."
"You hitchhiked."
"That's right."
"You are walking for peace."
I nodded, eagerly awaiting the next prophetic declaration from Sebastian, but he offered a chair instead, and showed me how to help him clean the pea pods he was preparing. As we worked together, he explained that he too was walking for peace, in France, and specifically for Ekta Parishad, which is an activist movement for land rights in India. Sebastian had already spent time in India for Ekta Parishad with his wife (who is a Quaker), and now he is hoping to raise awareness for the movement in France. His blog is: marchedoucementsurlaterre.blogspot.com
While we stored the peas in jars and prepared them for boiling, to preserve them, we compared our walks. The conversation ran from what our motives were to whether we walked with a staff or not, or where our minds were while walking. Sebastian hopes to finish his pilgrimage in Paris, and he hopes people will join him as he enters the city. 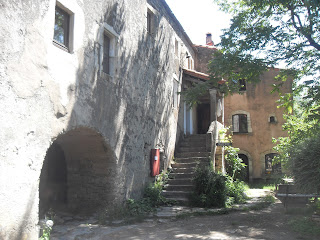 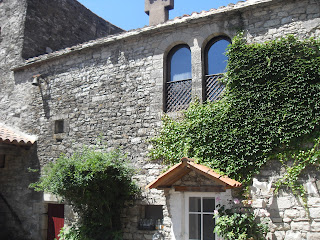 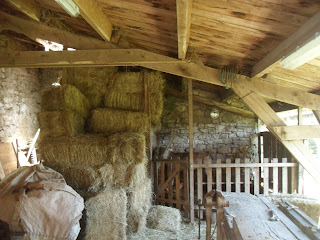 I met with Alastair later on, and he showed me the room we would be sharing, which was simple and sufficient. He gave me a tour of the grounds, showing me the showers, the dry compost toilets, the vegetable garden, and the various places where the community gathers for prayers, music and dancing. He also showed me what was once a pottery, and a shop for making sandals, but these rooms are no longer in use as the community grows older, with fewer permanent members.
I joined the community for evening prayers, where I met most of its permanent members and visitors. Prayers are held twice a day, once in the morning, with everyone in a line facing the mountains and the rising sun; and again at the end of the day, with members gathered in a circle. Though I didn't understand much of what was said, a sense of peace and joy ran through me at these gatherings. 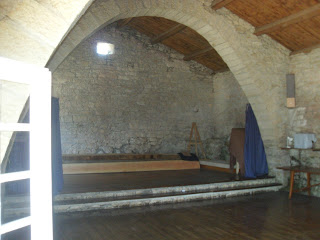 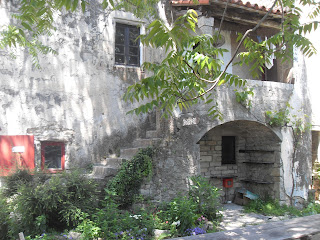 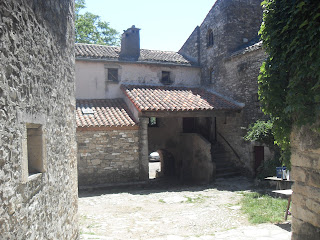 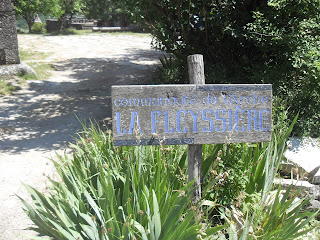 I spent only one full day at La Fleyssiere, but I came to understand the routine, at least for visitors. After breakfast and morning prayers, there is a meeting where the work for the day is proposed, and where visitors tell the group where they would like to work. The day's work while I was there was essentially weeding in the vegetable garden and in the potato patch. Before setting out to do this, however, the community's visitors prepare all of the vegetables for lunch, under the guidance of the cook for the day. Céline, who had been at La Fleyssiere since the previous Autumn, had the role of cook, and she instructed us on exactly how to chop the carrots, onions, and other vegetables. Once we had set out to weed the gardens, she had everything she needed, ready to cook lunch, the biggest meal of the day.
After an invigorating morning of wholesome labor, the communal lunch of purely vegetarian, homemade and homegrown food was delicious and filling. La Fleyssiere makes its own cheese, which was also delicious. After this midday break, there was more invigorating work in the potato patch near Bori Noble, which is another L'Arche community a few kilometers away.
In the evening, after dinner and prayers, several of us met Sebastian in the common room with his guitar and he taught some of us some very beautiful and spiritual music and chants. However, having little aptitude for learning chants in Hebrew (I think it was),  and being tired, I went to bed.
Alastair and I talked a bit before we fell asleep; our short time together had convinced us we were already close friends. The next morning I was on the schoolbus with two of La Fleyssieres' teenagers and two of its long standing members on worldly business to descend from the mountain and return to the relative chaos and madness of our society.


Posted by Kenneth Schroeder at 12:16 PM