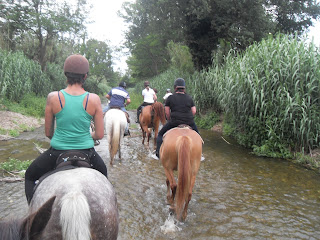 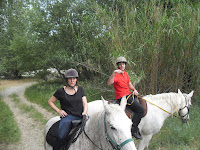 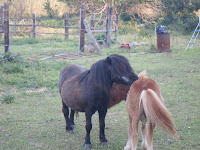 A day's walk from Céret brought me to Rando Cheval et Chariot, a horse-riding 'ranch' near the village of Palau del Vidre. I was greeted by a big dog that promptly bit me on the derriere, then I was greeted by René, who along with Kim, runs the ranch. Kim is from Scotland, and René, who is a local, is as proud to be Catalan as French. René had a grandfather who came over from 'Spanish' Catalonia after the civil war, so he speaks some Catalan and Spanish, which helped us to communicate to some extent.
Most of the time, Kim is managing her B&B with her mother near Céret, so I was working for René the week I was there. I soon discovered that ranchers in the American West have nothing on this French Catalan when it comes to being tough. René has broken his leg twice while taking tourists out on horse and carriage rides, and according to Kim, you wouldn't know he was in pain by looking at him. Of course, René doesn't smile much anyway, so pain might be hard to detect on his countenance in any event.
When I fell off a galloping horse named Isa (not Isa's fault at all, I just fell off) even though I felt like whimpering and skulking off to my quarters, I imitated René, shook off the pain in my already sore derrier, and climbed back on. Before long, René had me galloping again, properly.
The work I did on the ranch was divided between strimming and using a tractor to plow and cut grass for hay. The riding was a gift from René, and before long I was looking forward to going at a full gallop. Nevertheless, when I walked away from the ranch in the direction of Perpignan, I was a lot more sore than when I'd arrived, and I felt the 20 kilometer walk with a heavy backpack would give me a much needed rest.


Posted by Kenneth Schroeder at 10:48 PM