Into Bosnia, and Down to Sarajevo

Into Bosnia
After crossing into that part of Bosnia referred to as Republika Srpska we stopped by the river for a bath. As it turned out we were in a man's backyard, and when he arrived, rather than asking us to leave, he bought us pizza. Željko's family lived on the Croatian side of the river before the war, but had to move to the 'Serbian' side when the war started.
A few nights later we camped in a meadow, and the farmers who owned the meadow watched us from a distance. After dark we were approached by police with flashlights, while the local farmers came towards us through the woods, one of them shouting. An old man with one hand held an axe in the other. After seeing my sign and checking our passports, the police and the farmers left us alone without another word.

Novi Grad
In Novi Grad we shopped for food. We were preparing to leave the city to find a campsite before dark when a man named Dejan invited us to stay with him. We stayed with him for two days, enjoying the hospitality he provided and receiving many gifts from him. I now have a headlamp and a light jacket (among other things) thanks to Dejan.
We also went to a bar with Dejan where my petitions were passed around. Most of the comments were supportive of this walk, but one supported Serbian nationalism while another wished us bad luck.

Prijedor
In Prijedor, where ethnic cleansing took place during the war, we visited the Local Democracy Agency which works for local development and inter-ethnic dialogue and reconciliation. we met with Dragan Došen and two volunteers, Aleksandar Pavlović and Halida Selimović, who are working hard to promote peace and harmony in a place where healing has been slow.
Afterwards a man named Fikret treated us to lodging at the Hotel Prijador where we were able to relax and get cleaned up.
The night we left Prijador we found ourselves in an area where there was no 'wilderness' to camp in, so we asked a farming family for a place to put our tent. They put us in a clean and roomy storage shed instead, bringing in a table and milking stools to sit on while we were treated to a hearty dinner of eggs and sausage.
After Prijador we walked through Tropolje and Omarska, also sites of ethnic cleansing during the war. We found nothing in these places to remind anyone of what had happened other than the ruins of the concentration camp in Tropolje.

Banja Luka
In the capital of 'Republika Srpska' we again met our very good friend, Dejan, who treated us to coffee and introduced us to two of his friends. One of them, Branko, had walked with his father from Novi Grad to Prijador in 12 hours carrying all the household goods they could carry, while mortar rounds fell around them after the war started. (The same walk took us two and a half days). The city that had been a nightmare for so many was a sanctuary for Brank and his father. 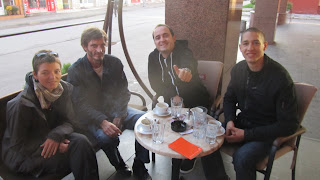 Another of Dejan's friends, a very idealistic student named Marco, managed to find us a hostel to stay in at no charge.
Earlier in the day I'd met a Muslim man named Ževad who told me how Banja Luka had been before the war; a mixed population that could live together in peace. He lamented that Banja Luka was now primarily a monocultural population.
Just outside of Banja Luka two cyclists stopped to talk to us; Berengere from France, and Daniel from the Netherlands. They treated us to coffee and found us a safe place to camp along the river. 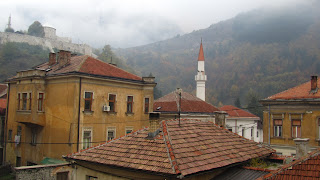 Upon entering the ancient Muslim capital, I saw graffitti in large block letters: NEVER FORGET SREBRENICA. We stopped at a large mosque to ask for a place to sleep, and were directed to the Medresa, where the homeless can find a place to stay. I mentioned that we were not Muslims. 'No problem,' they told us with a smile.
While looking for the Medresa, as we were a bit lost, we passed by a Catholic church to ask for the same. The church had been shot up during the war. The priest wanted nothing to do with us, it seemed, and I asked him whether he had Christ on his lips but not in his heart, as we had just needed a place to put our tent. Other Croatian Catholics noticed what had happened; two of them offered us a little money, and two others had a long chat with us and offered us encouragement. We were also offered a place to stay by an elderly woman, but after she had been to mass we couldn't find her or her address, so we looked again for the Medresa. When we arrived it was getting late, and the Medresa was filled up. We found an inexpensive hotel to stay in, going over our budget. 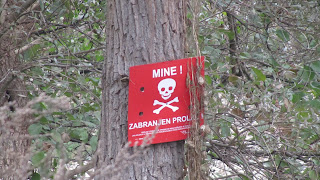 While passing this village we were invited to have lunch with a Muslim family by a man named Semin and his sister, Sadbera. As we walked through the village towards his house he explained that Ahmići had been destroyed during the war, and that there had been a massacre of Muslims there. As people had fled the village, snipers had shot them, men, women and children. Semin's grandparents had been killed in the attack, and his father, Enes, had later lost a leg in a minefield only 3 kilometers away while serving in the Bosnian army. He'd spent 6 years recuperating in Belgium, where Semin's brother, Hadis, was born.
I was surprised to hear that it had been Croatians that had murdered the people of Ahmići; until that point the stories I'd heard had been of Croatians and Bosnian Muslims suffereing at the hands of Serbians. 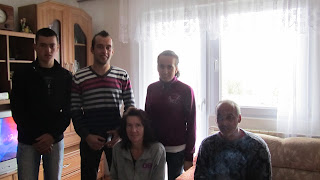 I was unable to eat much of the big lunch put in front of us by their mother, Mersa, because of the stories the family told us about Ahmići.
As we were leaving the village, Semin escorted us, telling us we were examples to the world because of this walk for peace. All I could think about in the meantime was tearing down the Croatian flag a neighbor was flying from his house and having a few strong words with him. It is obviously Semin and his family who are the examples; they have managed to return to a normal life, co-existing in peace with nationalistic Croatian neighbors. 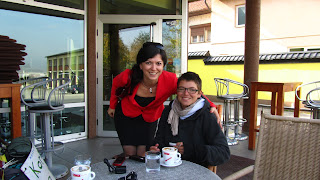 As we worked our way towards Sarajevo, passing shot up homes, schools and other buildings, and camping along the river bank or in meadows not marked as minefields, the Muslim festival of Bajram began to celebrate the pilgrimage to Mecca. A local man had just walked for ten months to get to Mecca, walking as well through war-torn Syria (where I will probably not be walking).

Many people could be seen carrying baskets, visiting neighbors either to deliver or receive gifts of food or money. Many streams ran red with the blood of sheep or cattle butchered for the feast. We were also given the occasional gift of baklava or candy. 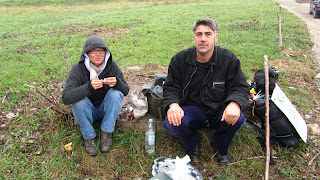 The night before we reached Sarajevo we were again in a situation where no 'wilderness camping' was to be found; I asked a man named Asim if we could camp on his property and he gave us permission. After dark we were visited by concerned neighbors who thought we were up to no good, but once we'd mentioned Asim's name, all was well. That night Asim and his wife visited to bring us food and water; the next morning they offered breakfast though we had to decline as we were in a hurry to get to Sarajevo. 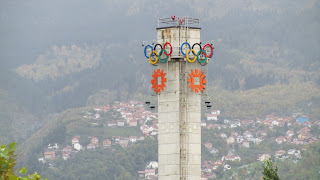 Entering Sarajevo we saw an enormous cemetery on a hillside where many war victims have been buried. A large block of flats, still in use, bore the marks of war damage from the Serbian shelling during the war. We passed the Olympic stadium, which is in disrepair. At an internet cafe a man joked with us about the dangers of what we are doing; 'Too many weapons in the hands of the wrong people', he said.

The center of Sarajevo, however,  is beautiful; a sort of Westernized Medina. Another man named Asim, the owner of  Hostel City Center, had previously invited me to stay at his hostel for free via e-mail. We are here now, for two days, and the hospitality is better than ever. Snow is forecast for tomorrow, but we'll be warm.


Posted by Kenneth Schroeder at 11:25 AM